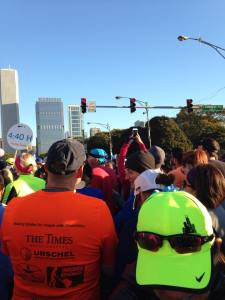 On October 12th I was one of 45,000 participants who ran the Chicago Marathon. It was a beautiful fall day with almost enough sunshine to make you consider moving out of the heat of H-town to cooler areas of the country. The 26.2 mile course was flanked with bystanders, cover bands and an Elvis impersonator.

Even with all the entertainment, the beautiful weather and the wonder that is Chicago, I had time to think. Running for over five hours will give you plenty of time to mull over just about everything good and bad going on in your life. During this time, after I decided to learn how to play chess and before I felt like my legs would fall off, the strong parallels between running and writing sprang to mind. Specially, the similarities between writing a novel and running a marathon.

1. You must be delusional.

If you seriously thought about how much pain and how much work writing a book or running a marathon would be, there is no way anyone would attempt either endeavor. So in order open a new document or lace up your running shoes, you must convince yourself that the job in front of you won’t eat your lunch. After all, running a marathon is just like running a mile – 26.2 times. Writing a book is a simliar exercise. You write one sentence, a few gillion times.

You will be writing or running when other people are either sleeping, watching television or otherwise enjoying themselves. Often you will also want to be sleeping or watching television. I’ve learned to allow only a 2-3 minute pity party before powering up the MacBook or pulling on my running shoes.

3. You must have stamina.

You have to accept that these projects – writing and running – do not come easily. Now it is true that sometime when I run I feel like I have Hermes’s winged sandals laced to my feet instead of my size 9 Wide Width New Balances. Unfortunately this feeling usually lasts only a minute or until the song on Pandora finishes. Same with writing, sometimes it comes easily – but let’s not kid ourselves. It usually doesn’t. Instead, you must condiition yourself to work through the pain.

4. You must rest your body.

Many times in my new mother sleep deprived state I would doze off at the keyboard. This does not make for the best of writing. One’s muse does not enjoy listening to you snore. In the same way, if you are staying up too late or waking up too early, you won’t be able to put in the same atheltic performance your body could perform if only given enough sleep.

5. You must fuel your body.

Same goes for the calories you injest. Even though I believe whole-heartedly that chocolate can solve most of the world’s problems, too much sugar or caffeine can sicken your body and your spirit. Eat good foods and your body will perform creativiely as well as physically.

6. You must do it for yourself.

Both writing and running for most people are efforts that go largely un-noticed by the general population. Only one person won the Chicago Marathon out of the 45,000 that ran this year. And (spoiler alert) it wasn’t me. Same goes for the Newbery or Printz or even the awesome simple prize of publication. It just doesn’t happen often enough to feed the soul. Your running and your writing must do that alone.

7. You will be scared but you will do it anyway.

Creating art and performing athletically both have the ability to produce a heaping pile of fear. This can hit you in insidious ways. My fear of creating often manifests through procrastination and not “feeling” like writing or running. When I am on deadline it is amazing the number of things I have to do before I sit down at the computer to write. The same goes for training for a race. Many a day will dawn when you don’t “feel” like running. The awesome thing about feelings concerning art or exercise is that you don’t necessarily have to have them to run a few miles or write the next chapter. All you have to do is, well do it.

Elizabeth Gilbert, my hero and favorite TED talker, once said that in order to be creative “one must believe in impossible things”. Which was why I decided to attempt the marathon. I truely didn’t believe that I could do it. This doubt was and still is exactly like the creative doubt I experience on a daily basis. Now with the marathon completed, I’m able to remember the fear of not being able to finish the race.(my hands were shaking so bad at the start of the race I spilled my sports drink down the front of my shirt). And when I remember that fear, the self-doubt that pops up everytime I sit down at the computer is much easier to ignore. After all, I ran a marathon. Writing a novel should be a piece of cake. 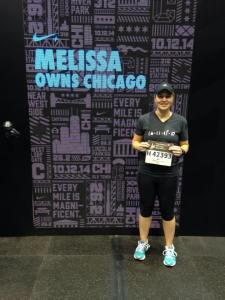